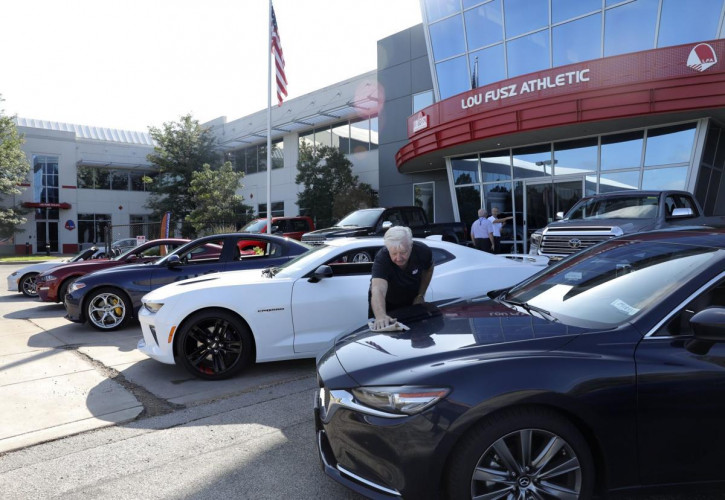 Multiple St. Louis auto dealers are introducing short-term rental service plans that could have customers in a high-end sedan to drive to work during the week, a sporty convertible for a Friday night out on the town and an SUV to lug around the kids over the weekend — all for a flat fee that includes insurance, maintenance and other car related costs.

Lou Fusz Automotive Network and Jim Butler Auto Group are among those that will begin offering customers the subscription-based car rental service.

Car subscriptions have grown in popularity with independent auto dealers, but also with car manufacturers, including BMW and Volkswagen.

“As car sharing and on-demand technology evolves and the business model of personal mobility changes, there will be less car sales because ownership of assets in this new order is not what it is cracked up to be,” said Neil Abrams, a former Hertz executive who now operates his own consulting firm that supports car rental and travel firms. “Why tie up the capital by owning if you can accomplish the same thing by not owning?”

Lou Fusz’s Fusz Select plan, debuting in early September, is among the first of its kind in the region. Customers pay a one-time activation fee of $550 to start and then are charged a flat monthly fee of $950 that includes taxes, maintenance, insurance, concierge delivery and cleaning.

Users of the plan could turn in their cars — or “flip” them, as the industry refers to it — and get a new one as many times as they’d like. Some of the vehicles in the fleet include the Alfa Romeo Giulia, Buick Enclave, Chevrolet Camaro, Ram 1500, Ford F-150, Ford Mustang GT, GMC Sierra 1500, Jeep Grand Cherokee, Kia Stinger, Mazda6, Subaru Ascent and the Toyota 4Runner.

In all, said Lou Fusz New Car Director Pat Fusz, the dealership expects to invest at least $2 million to buy the 50 vehicles that will debut on the platform when first introduced. A more costly tier that would include higher-end vehicles could be introduced later this year.

“We saw this was a growing trend,” he said. “The traditional way of owning a vehicle is going to change over the next few years and we see this as a way to stay ahead of that trend.”

Pat Fusz said industry insights suggest consumers would flip a car on average 3.3 times per month. He expects about 30 customers to participate in the subscription service to start, “but that number will cater to demand and we hope that within a year’s time we’ll be seeing that figure at closer to 200.”

Not all are as bullish on the trend.

Steve Brown, a general manager for Frank Leta Acura in south St. Louis County, said he’s monitoring companies nationwide that are implementing such models to gauge the viability and consumer reception to it.

“The entire model depends on high subscription rates so that the vehicles are in use as often as possible, thereby maximizing profitability and minimizing holding costs,” he said. “We have no plans in the near future to implement this model as we have seen no evidence that there is a substantial demand for it.”

Michael Right, vice president of public affairs for AAA, said the high price of the service could scare off some consumers.

The average true cost of vehicle ownership, according to AAA, is $8,469 per year, or $705.75 per month — more for a large truck and less for a small sedan. That total includes financing the vehicle, depreciation, maintenance, repair and fuel costs.

“These subscriptions are looking to attract customers that aren’t particularly worried about the cost, but are more concerned about the convenience aspect of it,” he said.

The Jim Butler subscription plan, called driveBlackTIE, will debut in early October and cost under $1,000 a month. Vehicles available in the plan would include brands across the Jim Butler portfolio, such as Alfa Romeo, Chevrolet, Kia, Maserati, Jeep, Dodge and others.

Brad Sowers, co-owner of Jim Butler, said he’s banking on three types of customers to utilize the service: the lifestyle customer who just wants to drive without the hassle of maintenance or insurance, the mid-level luxury type that might want to drive a Mercedes from time to time and the high-end performance fans that want to get behind the wheel of a high-end BMW or Maserati.

“We’re not saying it’s going to be huge, but it will be a limited offering for 15 or 25 users to start and we’ll work through that with them and launch it through the remainder of the year,” he said. “I’m not sure it will take off in St. Louis, but I do think there’s a niche in the marketplace for this type of thing. The cars are already here — we have $16 million in inventory so there are plenty of options to offer. Now the question is can we make money doing it?”

The subscription model, which essentially is short-term leases on vehicles, has the potential to upend the traditional car rental industry, including St. Louis’ largest private company, Enterprise Holdings, which operates Enterprise Rent-A-Car, Alamo Rent A Car and National Car Rental.

“Any change to the competitive landscape is going to be of concern,” Abrams, the consultant, said. “But Enterprise is the largest car rental company on the planet and they have certainly smart leadership that has seen the writing on the wall, so I have no doubt they have a strategic plan to broaden their reach.”

Indeed, Enterprise Holdings spokeswoman Laura Bryant said the Clayton-based company is in the final stages of development of its own subscription service model, though few details were disclosed.

“Currently, we work with large dealerships and manufacturers to help them fulfill their programs, and we have offered our own similar product for years,” she said. “Our new model will have its own unique value proposition, with unmatched state-of-the art technology that will enable customers to have access to hundreds of different makes and models of vehicles.”

Enterprise Holdings has a fleet of nearly 2 million vehicles spread across 6,400 cities in the United States alone (it operates in 90 countries overall), providing it a key advantage should it decide to implement it — geography and the ability to extend access to such a subscription as consumers travel across the country, as opposed to independent auto dealers that in most cases are bound to their own market.

An opportunity, too, exists for Enterprise Holdings’ affiliate company Enterprise Fleet Management, which already manages a fleet of more than 520,000 vehicles in the U.S. and Canada for various companies, government agencies and other organizations with fleets as small as 20 vehicles.

“As this situation evolves, rental companies are positioning themselves, and Enterprise owns one of the leading fleet management businesses in the world,” Abrams said. “Manufacturers build cars, they don’t manage cars or fleets. Technology companies build this connectivity for the cars, but they aren’t in the fleet management business. Enterprise (Holdings) is doing over $20 billion a year (in revenue) so they have a lot of money to transition themselves or develop their own plan.”